SALES (844) 749-7785 SUPPORT (888) 534‑1711
PricingPricing
Login
PricingPricing
LoginGet Started
Spotlight
Share Justworks with a friend.
Start Your Referral
How Justworks Can Help You
Hiring and Onboarding for Remote TeamsAccess the tools and resources to help you build your team, stay compliant, and grow in all 50 states
Offer High-quality Health InsuranceWe make it easier for you to access the large-group health insurance plans you need
Skip the Manual Work of Running a BusinessNo more time wasted figuring out complex payroll, organizing documents, or administering benefits
Take Better Care of Your EmployeesPrioritize your team’s wellbeing with access to quality benefits and perks that focus on employee health and wellness
Accelerate Your New BusinessGet access to the software, services, and support that will help you scale your business fast
Manage Time Tracking With EaseOur robust time tracking tool and user-friendly HR platform integrate seamlessly so timekeeping is effortless for you and your team.
Platform Features
Justworks PEOBenefits, payroll, HR, and compliance all in one place with 24/7 support.
BenefitsGet access to a variety of high-quality health insurance plans.
PayrollRun payroll seamlessly and make any payments you need to at no extra cost.
HR ToolsDitch the spreadsheets for HR tools we’ve built from the ground up.
ComplianceWe help you alleviate the unknown and comply with employment regulations.
Full-Service SupportWe’re here to help you navigate the ins and outs of running a business.
Partner with us
Accountants
Brokers
Spotlight
Justworks launches new time & attendance integration.
Learn More
PEO Plans
Basic — so much more than payroll softwareAccess robust HR tools, compliance resources, wellness and financial perks, and 24/7 customer support
Plus — so much more than health insuranceGet payroll software, HR tools, compliance resources, wellness perks, and 24/7 support with access to quality healthcare coverage
Our CompanyLearn about Justworks, our investors, industry certifications and qualifications, and company history.
Our ValuesWe value camaraderie, openness, grit, integrity, and simplicity at Justworks. Our company values are reflected in our product and in our team.
Our TeamGet to know our founding story and meet the Justworks Leadership Team.
Our CustomersFrom coast to coast and across industries, small- and medium-sized businesses are saving time and money using Justworks’ all-in-one solution.
CareersMake an impact on growing small businesses. Learn more about Justworks careers here.
DEIBJustworks strives to reflect the world we want to see by leading with diversity, equity, and inclusion principles, a guiding mission and vision, and follow-through.
PressRead the latest news about Justworks, including company and product announcements, research reports, interviews, and more.
Justworks.orgLearn how we are creating equitable access to entrepreneurship for underrepresented founders.
Spotlight
Share Justworks with a friend.
Start Your Referral
Resource CenterBrowse tips on what you need to launch, run, and scale a business successfully, from healthcare to hiring, filing taxes, or just creating a great place to work.
Events and WebinarsCheck out our online talks on topics that matter most when protecting your business and taking care of your team.
Partner With UsJoin Justworks partners to get access to free HR tools, resources, and savings that will allow you to offer your clients more.
Referral ProgramKnow any companies that could benefit from seamless payroll, access to affordable benefits, and HR support? We’d love to meet them.
Customer Help CenterAre you a Justworks customer? Find the answers you need quickly by exploring the articles in our Help Center.

Ellevate’s Summit for Women in Business Goes Beyond Talk, to Action

Ellevate’s Tina Pettigrew talks about how the summit is giving women in business actionable tips to start using immediately. 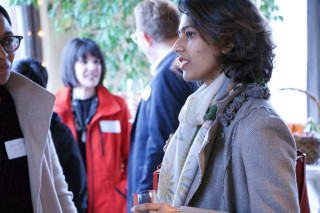 Businesses owned by women are on the rise — and they're a major contributor to the economy.

According to the US Census Bureau, in 2014, women owned 7.8 million businesses, accounting for 29% of all businesses nationwide. As the number grows, women are looking for even more ways to give each other opportunities and advice for the road ahead. That's one reason Ellevate Network is hosting its first summit, after 20 years of connecting ambitious women leaders and entrepreneurs.

“There’s a need for it,” said Tina Pettigrew, Director of Communications at Ellevate Network, a global women’s network.

We spoke with Tina about the goals of the upcoming summit, and how Ellevate Network works.

Want to check out an interview with Ellevate’s CEO? We have it here. How far does the Ellevate network stretch?

The community, including alumni and supporters at our events, is around 40,000 women. We have chapters all over the world. Our network itself — between social media and email list — is a couple million at this point.

Every chapter has their own regional flair and community of local women. In Dubai, it’s totally different than all the chapters we have in New York, Chicago, and LA. It’s a good thing, the way we see it. We want every chapter to have what’s a fit for them.

What do Ellevate’s chapters do?

Ellevate chapters give opportunities for local leaders to connect, and to provide each other with opportunities at a local level. It also ramps up online presence to create smaller groups for people to connect remotely.

Part of the reason we exist as a company, in general, is we recognize men have the upperhand because their networking involves drinks, the golf course, and being pals with one another. Women haven’t had the same type of thing. We want to provide women a chance and a space to do that.

Chapters are the backbone of the organization. Not only are they advocates of what we do for the cause, they’re on the ground as Ellevate’s ambassadors.

What inspired Ellevate to create its first summit on these topics?

Part of our values as a company is that we really believe in the power of diversity. What I mean by that is not only diversity in the people we hire and work with, but also diversity in the work we applaud. When we have customers or members tell us something they want or don’t like, we listen. It’s a regular habit to take everything into consideration.

People have always wanted to have a summit or conference. This year is our 20-year anniversary, and we decided this is definitely the time, even though as a small team we have so much going on, we thought it was really important.

The conversation about women in business is bigger than it’s ever been. That’s great for what we do for our community. It’s a good opportunity to bring some of the best leaders in the space advocating for equality in business. The timing is right, and there’s a need for it.

What do you expect attendees to take away from this summit?

We talk about things and have great discussions, but we’re not the type of event you go to if you are ambivalent. We’re a network made of changemakers — it’s a very action-oriented summit.

The whole idea is everybody needs a checklist of things they’re going to do tomorrow for themselves or their community or at work — lessons they’ve learned from the panels and session they can take to their everyday lives, a commitment they can take for speaking up or talking to their bosses, a strategy they can use.

We want to give women access. Not only are we giving people an agenda at the event, but we’ll have a manifesto of everyone’s impact statements and actions you can take from your everyday life at the summit. We want to hear back from people. We want people to take it into their own hands.

Ellevate’s Summit, Mobilizing the Power of Women, will take place in NYC on June 21st, 2017. You can sign up here to attend in person, or watch the event livestream.