Allow Employees To Be Vulnerable

Employees Stressed Out? Give Them a Space to Talk

The mix of politics in the workplace can be a touchy subject. Supporting employees through their anxiety; however, is much less controversial. 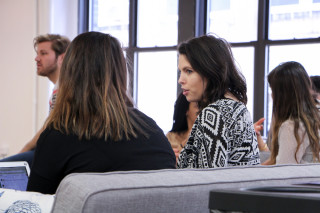 In 2016, most Americans suffered through a bruising political campaign. During that time, Gallup reported a record-high of 77% of Americans perceiving the nation as divided.

That divide and political tumult has also taken a personal toll. According to a survey conducted by the American Psychological Association in 2016, 52% of American adults reported the election was a very or somewhat significant source of stress. Both Democrats and Republicans were statistically equally likely to feel that stress — and it hasn’t immediately melted away in 2017.

Political tumult can be a strain on extended families and workplaces alike, where talking politics may be considered off-limits. With the taboo nature of politics combined with stress in the workplace accounting for lower productivity and employee engagement, what is an employer to do?

We spoke to Justworks’ CEO, Isaac Oates, about his approach to supporting employees who are experiencing anxiety both inside and outside of the workplace related to the current political environment.

His overarching philosophy? “The biggest thing is giving people space to talk about their worries,” said Isaac.

Many employees have a strict separation of church and state between work and personal lives. However, keeping those two lives separate can be a challenge and ultimately harmful. “It implies there are two competing forces, and the best you can do is be on a seesaw between the two,” said Isaac. “That isn’t really the way it should work.”

Allow Employees To Be Vulnerable

"The biggest thing is giving people space to talk about their worries." - Justworks CEO Isaac Oates

He suggests reaching out to employees and letting them understand they can show vulnerable aspects of themselves in the workplace. “You get the most of people when they’re their whole selves. If you create a space for people to talk, that is the single most important thing you can do.”

Employers and managers can achieve support through a variety of means, such as holding an All-Hands meeting to offer support around a recent event in the news.

“As a leader, if you’re creating a space, it’s probably easier to do around specific issues,” said Isaac. “It’s not like if you’re a Democrat and feeling disenfranchised you’re going to talk about it. It’s more on a specific topic that causes anxiety or fear with your employees.”

Learn how to keep your employees happy and productive.

If an All-Hands discussion doesn’t seem like a natural fit with your company culture, using effective management skills to reach out to employees one-on-one or in team meetings can also open up lines of support between employees and their managers. Even offering to go for a walk or grab a cup of coffee outside of the office can help.

Employers can take other concrete steps to offer employee support as well, such as offering wellness incentives like meditation and yoga in the office, or mental health services within their employer benefits packages.

Related Article: 15 Ways to Promote Workplace Wellness on a Budget

This year, Justworks launched TalkSpace for its employees, and is considering rolling it out as an option for Justworks members as well. The platform provides secure and anonymous online therapy, where users can access confidential help from professionals, any time of day.

And as we’ve pointed out in previous articles, supporting your employees has numerous payoffs, returning itself in increased profits and customer happiness.

Jason Whitman, VP of Customer and Employee Success at Justworks believes taking these steps are a long-term investment that help out all parties involved.

“I encourage [people] to make the employee experience a priority early on,” wrote Jason. “It will give a strong foundation for the other experiences (customer, partner, shareholder, etc.) that you care about.”

As an employer, you likely don’t have the power to smooth out the political climate and make it an easy ride for all your employees. But providing a healthy outlet for their overall anxieties is a great place to start.