SALES (844) 749-7785 SUPPORT (888) 534‑1711
PricingPricing
Login
PricingPricing
LoginGet Started
Spotlight
Share Justworks with a friend.
Start Your Referral
How Justworks Can Help You
Hiring and Onboarding for Remote TeamsAccess the tools and resources to help you build your team, stay compliant, and grow in all 50 states
Offer High-quality Health InsuranceWe make it easier for you to access the large-group health insurance plans you need
Skip the Manual Work of Running a BusinessNo more time wasted figuring out complex payroll, organizing documents, or administering benefits
Take Better Care of Your EmployeesPrioritize your team’s wellbeing with access to quality benefits and perks that focus on employee health and wellness
Accelerate Your New BusinessGet access to the software, services, and support that will help you scale your business fast
Manage Time Tracking With EaseOur robust time tracking tool and user-friendly HR platform integrate seamlessly so timekeeping is effortless for you and your team.
Platform Features
Justworks PEOBenefits, payroll, HR, and compliance all in one place with 24/7 support.
BenefitsGet access to a variety of high-quality health insurance plans.
PayrollRun payroll seamlessly and make any payments you need to at no extra cost.
HR ToolsDitch the spreadsheets for HR tools we’ve built from the ground up.
ComplianceWe help you alleviate the unknown and comply with employment regulations.
Full-Service SupportWe’re here to help you navigate the ins and outs of running a business.
Partner with us
Accountants
Brokers
Spotlight
Justworks launches new time & attendance integration.
Learn More
PEO Plans
Basic — so much more than payroll softwareAccess robust HR tools, compliance resources, wellness and financial perks, and 24/7 customer support
Plus — so much more than health insuranceGet payroll software, HR tools, compliance resources, wellness perks, and 24/7 support with access to quality healthcare coverage
Our CompanyLearn about Justworks, our investors, industry certifications and qualifications, and company history.
Our ValuesWe value camaraderie, openness, grit, integrity, and simplicity at Justworks. Our company values are reflected in our product and in our team.
Our TeamGet to know our founding story and meet the Justworks Leadership Team.
Our CustomersFrom coast to coast and across industries, small- and medium-sized businesses are saving time and money using Justworks’ all-in-one solution.
CareersMake an impact on growing small businesses. Learn more about Justworks careers here.
DEIBJustworks strives to reflect the world we want to see by leading with diversity, equity, and inclusion principles, a guiding mission and vision, and follow-through.
PressRead the latest news about Justworks, including company and product announcements, research reports, interviews, and more.
Justworks.orgLearn how we are creating equitable access to entrepreneurship for underrepresented founders.
Spotlight
Share Justworks with a friend.
Start Your Referral
Resource CenterBrowse tips on what you need to launch, run, and scale a business successfully, from healthcare to hiring, filing taxes, or just creating a great place to work.
Events and WebinarsCheck out our online talks on topics that matter most when protecting your business and taking care of your team.
Partner With UsJoin Justworks partners to get access to free HR tools, resources, and savings that will allow you to offer your clients more.
Referral ProgramKnow any companies that could benefit from seamless payroll, access to affordable benefits, and HR support? We’d love to meet them.
Customer Help CenterAre you a Justworks customer? Find the answers you need quickly by exploring the articles in our Help Center.

The Challenge of Flexible Jobs

Why Work From Anywhere?

Flexible jobs are important to many workers, including the Justworks team. Learn what happened when we tried out a Work From Anywhere Week experiment. 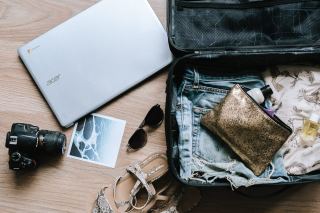 Having flexible jobs and workplaces is something many workers today really want. Of course, this issue can be tough to manage for employers.

A lot of complicating factors come into play when people are working from home or outside the office, like scheduling, communication, and good management, just to name a few.

Learn which perks and benefits employees want the most.

It’s an issue we deal with here at Justworks, too. So this year, our leadership team decided to try a creative experiment: Work From Anywhere Week. Everyone in the company was allowed to take a full week to work remotely from wherever they wanted — as long as they were able to work their regular New York hours and do their core jobs.

How did this experiment turn out? I checked in with Isaac Oates, Justworks’ CEO, and Kirsten Behncke Colyer, VP of People and Talent, to discover more about the strategy behind Work From Anywhere Week and what lessons they learned from it.

The Challenge of Flexible Jobs

Justworks has long had a policy of flexibility for employees, generally based on their department and their role. While offering flexible jobs is a nice benefit, it can also get a little tricky.

“The hardest thing is that each type of job has different requirements,” said Isaac. “Some jobs, like software development or design, tend to have more flexibility; others, like sales and operations, tend to have much more structure or need coverage at different times.”

Empower managers and department heads to create flexible work policies for their own teams.

Kirsten noted that having one policy for the entire company just doesn’t work. It’s better to empower managers and department heads to create flexible work policies for their own teams.

“They need to have an approach they can use for the whole team, but it doesn’t need to be the same from one department to the other,” she said. “But overall as a company, we have a bias to want people here.”

Why the bias? Kirsten explained that Justworks’ belief is that to have the culture we have — a culture that helped us win Great Place to Work awards — people have to be present. Adding remote workers or remote offices would make it tough to maintain the same level of company culture. After all, camaraderie is one of our core values.

Why Work From Anywhere?

While office culture is key, and so is the energy and collaboration that it brings, people still love flexibility. This is something Kirsten and Isaac understand really well.

“Every once in a while, people like to put their feet up — and not just on our couches,” Kirsten said. “Maybe on their own couch at home, or on a couch in Colombia.” That’s where Work From Anywhere Week came into play.

"Every once in a while, people like to put their feet up — and not just on our couches."

The idea came from a couple of Isaac’s experiences. A few years ago, he was inspired by a company that took employees on a retreat to a different international location every year, which always seemed fun — though admittedly hard to achieve, especially for a growing business. The other inspiration came from his time in the military.

“The army has a concept called ‘block leave’ where an entire unit goes on leave at the same time. It’s so smart!” Isaac said. “Instead of having a few people gone continuously, you have everyone gone at the same time and shut the unit down.”

Of course, Justworks is dedicated to staying up and running 24/7. So combining the two concepts offered a great way to give the Justworks team that desired change of scenery, while also ensuring that we were able to meet our business goals.

During Work From Anywhere Week, the Justworks team set out around the country, and beyond. One group of coworkers spent the week in Colombia! Others kept it more low-key, and opted to spend the week working from home, or in the (much quieter) office — Isaac included.

“My son is in public school so I stayed in New York,” he said. “I already have lots of outside meetings so the week actually wasn’t that different, other than more phone calls and fewer in-person meetings.”

For those folks that did travel in the U.S., they were encouraged to take the opportunity to visit our existing customers. It’s always inspiring to get to know the people who use our platform, and Work From Anywhere Week provided the team with many insights into the amazing things our customers around the country are doing.

As for the day-to-day work outside the office, it could be challenging, particularly for employees who aren’t used to working from home or remote work. Remote management is also no small feat. To help people prepare, the leadership team gave guidance and advice to managers.

“We talked about the importance of certain structures like a daily stand-up meeting, and how to use video conferencing,” said Kirsten. “There is a huge difference between Work From Anywhere Week and having fully remote management, but it was just enough for people to have the experience and learn.”

At the end of the day, was this remote work experiment a success? The short answer is, yes! The longer answer depends a little bit on who you ask. For Isaac, his hope was that people would enjoy the change of scenery, create a memorable shared experience, and accomplish their work priorities.

“The biggest sign of success was how excited everyone was to be back in the office together the following Monday morning,” he said. “I love that about our company.”

97% of employees said they were able to accomplish their goals and get in touch with their coworkers.

Kirsten measured success in a few ways as well. While she recognized that it’s a fun benefit, we still needed to run a business. She said success in her eyes was at least mid-level productivity during the week, great employee engagement, and teams reinvigorated from the change of pace.

Isaac also asked employees to fill out a survey about their experience with Work From Anywhere Week. The response, as you may have guessed, was overwhelmingly positive. 97% of employees said they were able to accomplish their goals and get in touch with their coworkers, and 98% felt the week was a change of scenery. In addition, 97% think we should do Work From Anywhere Week again.

“It was a great experience for the company,” said Isaac. “It helped each team learn more about how they work together.”

Isaac also offered some advice for other companies who might consider trying their own Work From Anywhere Week.

“If you do it, make sure you’re clear on expectations ahead of time, like travel arrangements, expenses, work hours, and availability,” he said.

In the survey, employees offered their own suggestions for people embarking on a remote work week. Some of their advice was to be explicit with your team about schedules and availability, ensure you have good internet access, and hold yourself accountable to daily goals, to name a few.

The biggest takeaway may just be to try new things. Workplace flexibility is going to look different for every company, and possibly even every team. Work From Anywhere Week was one creative solution that worked for us, but there are countless other solutions that may work for your business.