Helping Women to Succeed in the Workplace

Women in Business: Looking to Elevate Your Career? Go Forth and Network

Justwomen speaker and CEO of Ellevate, Kristy Wallace, discusses how companies and women themselves can empower women in the workplace. 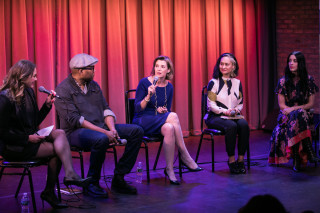 Kristy Wallace knows the power of professional networking firsthand. As a member of the networking hub Ellevate, she turned to the community for general guidance and advice and ended up working for the company itself.

“I’m fulfilling my purpose and loving every minute of it,” said Kristy in an interview by phone.

Helping Women to Succeed in the Workplace

Kristy began her career in investment banking, but soon moved into the startup space and worked for Vault.com, a career media company. Over the course of nine years, she rose from the sales assistant to overseeing global expansion and becoming GM of international operations.

After a few years at another start-up, Zeel.com, she began her life-changing career at Ellevate. Now the CEO, Kristy gets to encourage women in business to leverage the power of networking with a global community for women.

Kristy spoke with Justworks about the core mission of Ellevate, how companies can enable women to succeed in the workplace, and gave networking tips for women in business looking to expand their careers. What is Ellevate’s mission, in your words?

Ellevate is a global professional women’s network and our mission is to close the gender achievement gap in business by providing a community to lean on and learn from. Women make up half of the global population, contribute $7 trillion in US consumer and business spending and drive 85% of all consumer purchasing.

But the power of women in the economy isn’t translating to the workplace. While women represent 47% of the US workforce, we hold less than 20% of Fortune 500 Board seats, 14% of the top five leadership positions at the companies in the S&P 500 and 4% of S&P 500 CEO spots. There are even more men named John running large corporations than there are women CEOs. The gender gaps also extend to representation in politics, access to funding, allocation of government contracts, and more.

We believe that we can impact these numbers through the power of networking. Research shows that networking is the number one unwritten rule of business success and it’s the people in your network who will connect you to the board opportunity, coach you through asking for a raise, invest in your company, and more. The community you surround yourself with is key, and the education, support, and insights you gain from this community help you grow as a professional.

You’re an expert in networking. What networking tips would you give to women who are still learning and trying to find their place?

I would say do it first and foremost — make sure you are networking. The word ‘networking’ oftentimes makes people cringe because you think it’s scary or overwhelming or doesn’t have the ROI. That’s not the case. In fact, a 2013 Harvard Business Review article states that “Lack of access to informal networks — especially those networks that can provide important information — is one of the primary barriers to the advancement of women.”

Find a community that you want to be a part of. That could be your local church, your local mom group, running club, or professional network. Make it a point to set a goal, such as, ‘I’m going to one event a month or two events a month.’

Also, engage your network on a regular basis. It’s about understanding how to use social media and things you do everyday to engage your network, like sharing a relevant article and calling out someone you think it pertains to. The worst thing that someone can do is only leverage their network when they need something. It’s not really about just going out there every time you want something. To fully grow and engage with your network, it has to be what you can offer to them to have an ongoing conversation and relationship.

What do you think is the biggest challenge in the workplace women are facing today?

This answer changes everyday, but i would say there are two.

The first is a lack of confidence, that’s a big one. We tend to undervalue our skills our capabilities, and what we bring to the table. I wish women would be overconfident, because they would likely still be underconfident. Ellevate Network strives to bolster that confidence.

The second is the conflict between high achieving women and the workplaces in which they find themselves. Women who are working really hard and want to get to the top oftentimes find themselves burned out or in a place that doesn’t respect the whole human being. They feel that it is either all or nothing — work really hard or don’t work at all. The middle ground doesn’t seem attainable, but it is. Finding a right company culture can help propel your professional career even further because it is a culture that support your success — as an employee and as an individual.

What’s holding women back is workplace culture, which is too focused on the external customer and not the internal driver.

What measures can companies take to make sure women feel welcome and have the real ability to advance?

The first measure they can take is to have more women in leadership. Not only does diversity of opinion and though lead to better business policies and results, but it also clearly shows that your company values diversity and is committed to gender parity. Lead by example.

Companies also need to start thinking about their employees and their workforce as their greatest asset as a business. How do they continue to grow and refine that asset? How can an employer differentiate themselves and work with employees to develop policies that can help further the success of their business?

Are there any themes or gatherings with Ellevate that are around a particularly popular or sought-after topic?

The Ellevate community is quite diverse, not just in background and ethnicity and the traditional measures. Ellevate members span over 40 geographically diverse chapters, and they work in different industries, functions, and stages of their careers.

We do over 500 events and 100 webinars a year. What we see resonating is big events around owning your your career, including men in the gender parity conversation, future leadership traits, unconscious bias, the power of negotiation and, and inspiring conversations with female role models such as Sallie Krawcheck, Ann Shoket, Gretchen Carlson, Ann Marie Slaughter, Venus Williams, Jacqueline Novogratz, and Tory Burch.

We also do a series of events on brand building, being thought leaders, mentoring, and a lot of topics out there that are of interest — and we include men in the conversation, too. It’s important that we have all voices at the table, unified and engaged around gender equality.

Justwomen’s discussion theme is navigating workplace communications between genders. What has your experience been in communicating well in a mixed-gender workplace?

It goes back to being confident. I didn’t always have that confidence — I can’t tell you how many times I sat in a meeting, and then left and typed an email with my ideas and thoughts. It’s important to work in a culture where all voices are respected, and you feel comfortable expressing your opinion and your voice.

My greatest sponsors in my career were men, and I’m so thankful for that. It’s absolutely not about just women helping women, it’s about all of us who believe in equality and working together to close these gaps. If you look at the top of an organization and everyone looks and sounds the same and you don’t fit that mold, you’re likely going to have a harder time.

Kristy will be paneling Justwomen in NYC with Jennefer Witter, where she’ll discuss navigating workplace communications between genders. You can learn more and request an invite to the event here.